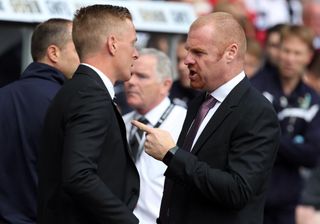 Nathan Dyer - who had a loan spell at Turf Moor earlier in his career - scored the only goal of Saturday's match in the 23rd minute of a first half that was dominated by the hosts at the Liberty Stadium.

However, the Premier League new boys were much brighter after the break and squandered numerous opportunities to net an equaliser.

And, while he would like to have come away with at least a share of the spoils, Dyche was in a positive mood after the final whistle.

"It's disappointing that we didn't come away with anything, but you could see the growth from us," he told BBC Sport.

"In the second half, we were excellent.

"Sometimes, when you are promoted, you are wondering if you belong here. In the first half, we showed them too much respect and at half-time I said 'go out and express yourselves'.

"The movement, energy and determination was good, but we have to learn quickly.

"We knew this would be a challenge, a difficult one, and we are enjoying the way the team are operating, but we need to get points on the board."

Burnley's next chance to pick up Premier League points will be at home to Manchester United next weekend.