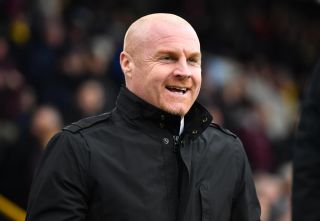 The 27-year-old was introduced with 22 minutes played at St Mary’s after Chris Wood pulled up with a hamstring injury.

Vydra, who had not scored for the Clarets since September 2018, looked sharp and showed great composure on the hour mark to control Jeff Hendrick’s ball on his chest, spin away from Kyle Walker-Peters and rifle into the top corner.

It earned Burnley all three points after Ashley Westwood’s second-minute opener, directly from a corner, had been cancelled out by ex-Clarets forward Danny Ings.

Dyche joked: “Westy’s (goal)? It was a brilliant finish. We worked on it all week. We decided there was a gap at the near post and we could use it wisely and he whipped it in with the wind, so we measured the wind for that to happen.

“No (seriously) I mean you need big moments to win games and that was a big moment in a tight game, and Vyds has stuck at it.

“He does do as well as many other players here when they are not in the side and he has the respect of the group.

“I can assure you when he walked in they were all buzzing for him and we have got such an honest group, they know when you are not playing it is hard.

“But the players here know and respect the people who are not playing because they know when they come in, they have got to be ready and they are.

“He showed signs of that and not just the finish, but the work ethic to work for the side and obviously the finish is the icing on the cake. It was a brilliant goal.”

Southampton and Burnley played out the lunchtime kick-off in terrible conditions, with strong winds and heavy rain present throughout due to Storm Dennis.

The three points for Dyche’s men moves them up to 10th and just two points off Wolves in seventh. They are also now 10 points clear of the relegation zone.

“All wins are big wins in the Premier League, but we are on a good run,” he added.

“It is a tough place to come, especially with their form lately and the weather. It probably won’t look it on the TV when it is shown later, but it was horrendous and for both teams I thought it was very difficult.”

Southampton boss Ralph Hasenhuttl had more bad news to report at full-time with Nathan Redmond set for a spell on the sidelines with a hamstring injury sustained in training on Thursday.

Sofiane Boufal could join him on the treatment table too, after he was forced off in the first half with an ankle issue.

“We can only get clear diagnosis when the blood is gone, but minimum one month and maximum maybe two,” Hasenhuttl said on Redmond.

“Hopefully not too bad (for Boufal). I don’t know at the moment with his ankle.

“We have two number 10s left and the two 10s they have now the chance to play and must show up.

“Everyone is always demanding to play and we have now two changes in the team and we must find a way back to the way we played before this game.”