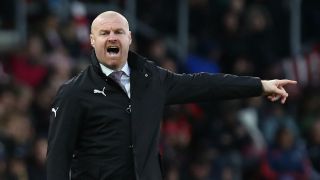 The Clarets started with fit-again forward Chris Wood supported by Jeff Hendrick - the match-winner against Newcastle United on Monday - but they did not muster any sort of presentable opportunity before being replaced by Barnes and Vokes.

And having repelled Southampton's attacks throughout, Burnley took their one big chance as Vokes sent a fine header into the bottom-right corner.

Dyche felt that the goal was just reward for the pair, who turned the game from the bench.

"The two that came on up front were a credit to their professionalism," he said. "They came on and really affected the game today and Sam Vokes' header was a fantastic finish. What a header."

Burnley climbed to sixth at full-time, but Dyche is keeping his feet firmly on the ground.

"I am delighted to be where we are," he added. "But there are a lot of challenges coming our way and the group know we will have to work hard for every point we get.

"The thing I guaranteed when I got here is a group that will give everything."

Southampton boss Mauricio Pellegrino was frustrated by the result, having felt his side had done enough to win the game.

"We did everything we had to do against an opponent that was defending 90 per cent of the game," he told Match of the Day.

"We were much better than them in all different aspects of the game apart from efficiency. They had one chance and scored. It is really painful for us, we did everything. The intensity and football was good, but we lost."