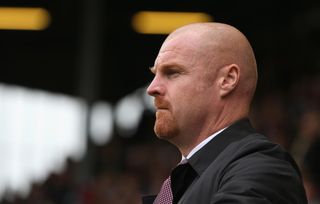 Only Scott Arfield has found the back of the net this season for Dyche's men since their promotion from the Championship - and that strike came in a 3-1 defeat to Chelsea in their opening fixture.

Burnley have failed to score in five games since then, leaving them bottom of the top flight with three points from six outings.

Last weekend's 4-0 humbling at the hands of West Brom highlighted their problems further, and Dyche has challenged someone in his squad to get them back on the goal trail.

"It's not a concern, it's a reality," he is quoted as saying to the Lancashire Telegraph.

"We have to affect it, we work with the players in training, we work on the mentality of it as well.

"But one of our mantras is be the man who makes a difference, and every player has to play with that.

"We need one to go in of course. We've got to keep working. It's relentless."