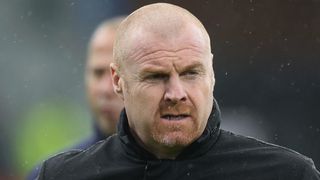 Sean Dyche preferred to focus on Burnley's overall progress across the past year after the Clarets began 2018 with a dramatic 2-1 defeat at home to Liverpool.

It looked as though Dyche's men had secured a point when Johann Gudmundsson struck in the 87th minute to cancel out Sadio Mane's superb opener.

But in the fourth minute of stoppage time, Ragnar Klavan nodded home at the far post to secure maximum points for the visitors and extend Burnley's winless run to five games.

The Clarets sit seventh in the Premier League on 34 points, only six fewer than their tally for 2016-17, when they finished 16th.

FULL-TIME Burnley 1-2 LiverpoolThe Reds steal three points late on with Mane & Klavan getting on the scoresheetJanuary 1, 2018

"It's a frustrating one, I thought we had a point," Dyche said. "It's very pleasing though to see how far we have come in a year, we are taking on these big teams in a different way now.

"It was a soft goal to win it - it happens, but it doesn't happen to us often. Our work ethic was tremendous, the belief was excellent. There are a lot of pleasing things, the bigger picture is we are pleased overall.

"2017 was a great year for us, we have got closer to teams who were out of sight. When the whistle blows we have a group of people who will give everything to win a game. That's a powerful thing.

"Liverpool were missing some big players but they still had four of their front five who cost £35million or something.

"On and off the pitch we have moved forward in a calendar year. We are becoming assured of ourselves in this division.

"We are playing a more mixed game now, last year we got it forwards more often but we are calmer now. We are resolute defensively, we have added to what we had. The quality has risen.

"To be on 34 points and be unfortunate to not have 35 shows what a season we have had."