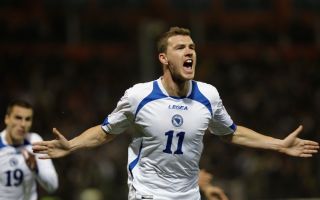 Bosnia-Herzegovina currently sit top of the Group G standings having won six of their eight qualifiers in a section containing Euro 2004 winners Greece.

Victories against Liechenstein and Lithuania in their final two matches will bag them a berth in next summer's South America showpiece in Brazil.

Speaking exclusively to FourFourTwo, the Manchester City striker said he is confident his country can finish the job.

"No actually I’m not [nervous], because I know what we have to do and we will do our best to achieve that. I’m very confident that we can do it," he told FFT.

Bosnia-Herzegovina, formed in 1992 following independence from Yugoslavia, have yet to qualify for a major tournament but have come close on several occasions.

Portugal denied them spots at both Euro 2012 and the 2010 World Cup in the play-offs, while Spain pipped them to a play-off place for the 2006 World Cup.

Dzeko, who is his country's all-time top scorer with 31 international goals in 56 games, is relishing the opportunity to make history.

"It would be something unbelievably special because we have never been in a big competition," said Dzeko.

Edin Dzeko is an adidas ambassador and wears the adiZero F50 - the fastest boot in football. To buy your pair visit www.adidas.com or join the conversation @adidasUK