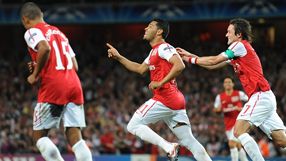 Signed for a reported 12 million pounds from Southampton in August the 18-year-old is already being compared to Theo Walcott who followed the same route to north London in 2006.

England winger Walcott was one of a number of Arsenal players absent through injury on a balmy night at Emirates Stadium but Oxlade-Chamberlain made the most of his first appearance in the Champions League, firing the opener after eight minutes.

Brazilian left-back Andre Santos put Arsenal 2-0 up after 20 minutes but after Olympiakos, who had lost all their previous nine away fixtures in England, reduced the deficit after 27 minutes through Spaniard David Fuster it was an anxious night for the home fans.

Vassilis Torossidis, the only Greek in Olympiakos's starting 11, came within a coat of paint of levelling with an exquisite curling effort that cannoned off the crossbar in the second half but Arsenal hung on to put themselves in a healthy position with four points from their opening two games.

Marseille, who Arsenal visit next, top the standings after recording their second win by beating Borussia Dortmund.

Olympiakos's 10th defeat from 10 matches on English soil left them still looking for their first point in the group and manager Ernesto Valverde cursing a poor start which had left a "bitter taste" in his mouth.

The visitors had 15 goal attempts compared to the home side's 10 and Arsenal's coach Pat Rice, patrolling the technical area in the absence of manager Arsene Wenger who was completing his UEFA touchline ban, admitted his relief.

"They came and waited for us and broke us up in the middle of the park and in fairness you have to say they did well," Arsenal's long-serving number two told reporters. "Needless to say we are very happy with the three points."

Rice said Oxlade-Chamberlain's performance had been one of the major plus points and was cause for comfort among the North London club's fans who have watched Arsenal's worst start in the Premier League in the reign of Wenger.

"He is a very strong boy and listens to what people say," Rice said. "Arsenal fans are going to see a lot of this boy but he has a very strong challenge trying to get in front of Theo."

Oxlade-Chamberlain was the only English starter for Arsenal who had 11 different nationalities represented in their line-up, including fellow teenager Emmanuel Frimpong who recently pledged his loyalty to Ghana.

Talisman Robin van Persie was left on the bench as Wenger looked ahead to Sunday's Premier League clash with north London rivals Tottenham Hotspur but his absence was quickly forgotten as Arsenal surged ahead with a fast start that is their trademark on Champions League nights at Emirates Stadium.

Oxlade-Chamberlain showed a touch of class when he chested down a flighted ball from Alex Song, got a lucky rebound off Ivan Marcano and finished clinically past the unsighted Franco Costanzo for Arsenal's 200th goal in the group phase of the Champions League.