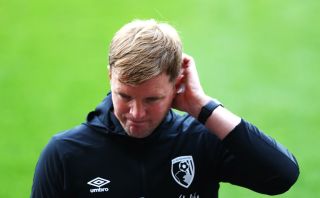 Eddie Howe believes emotion in football is being “wiped from history” by VAR after Bournemouth were pushed to the brink of Premier League relegation by a dramatic defeat to Southampton.

But the goal was disallowed following intervention from Stockley Park after Callum Wilson was spotted to have been offside in the build-up, allowing Saints to break forward and seal a 2-0 success at the Vitality Stadium.

Bournemouth suffered similar frustration in the recent goalless draw with Tottenham when England international Wilson had a last-minute effort ruled out on review for handball against Joshua King, while they controversially had two goals wiped out in the 3-0 loss at Burnley in February.

Howe’s side are reliant on results elsewhere to remain in the top flight and he believes they have received “very minimal” benefit from VAR during  a difficult season.

“It hasn’t only happened to us this season but it feels like we’ve been on the wrong end of a few calls that are so tight,” said Howe.

“You have the Tottenham one and (Sunday’s) one where the goals are given, there is a long pause and a long wait.

“You are fearing the worst and then that of course becomes reality and it’s so difficult for the players who have shared that joy and then it’s taken away.

“You go back to games earlier in the season that have really hurt us, you go back to the Burnley game where VAR was hugely influential. We have had our moments the other way but very minimal compared to the negative side.

“(It’s) incredibly difficult for him (Surridge) and everyone connected with the club because I am sure there are thousands of supporters around the world feeling the same way.

“That’s the downside of VAR because the emotion that the game has and what it means to people…it then gets wiped from history and that’s a tough one.”

Bournemouth finish the season at Everton on Sunday. They will be relegated before then, if managerless Watford avoid defeat against second-placed Manchester City on Tuesday evening.

Howe insists his players must retain belief that a great escape is possible.

“Next weekend we want to still be in there with a chance,” said Howe.

“It’s very much out of our hands, we are reliant on other teams so we will have to see how the week progresses.

“We don’t know what is the other side of this. It’s been a very difficult season in many different ways.

“We still have a game to go, we still have a week left, and we’re still in there so we will keep giving our all until that moment.”

After Southampton top scorer Danny Ings claimed his 21st Premier League goal of the season and missed a second-half penalty against his former club, substitute Che Adams completed the win moments from the final whistle.

Adams’ strike was just his second of a difficult first Premier League campaign since a reported £15million move from Championship club Birmingham.

Saints boss Ralph Hasenhuttl is backing the 24-year-old striker to be more prolific next season.

“It means a lot to him and also for us it was an important goal to win the game,” said Hasenhuttl.

“It’s important for him to get some self-confidence for next season and I am sure he will make more goals next season.”