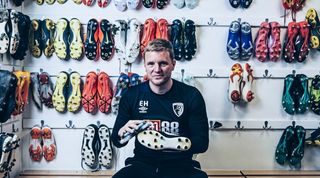 The 41-year-old is one of English football’s most highly rated bosses after overseeing Bournemouth’s remarkable rise from the bottom of League Two to the Premier League in just six years, where the club have now held their own for three seasons.

As a result, the former Cherries and Portsmouth defender has been touted as a future Three Lions boss, and was linked with the post after Roy Hodgson departed the dugout following England’s dismal last-16 defeat to Iceland at Euro 2016.

However, while Howe would certainly be interested in the job one day, he says he would miss regular coaching too much to give up club management anytime soon.

Speaking in the June 2019 issue of FourFourTwo magazine, the 300th edition and a 25th anniversary special, he says: “I think it’s difficult for managers of national teams because you miss the day-to-day coaching, and that’s the big thing for me.

“I consider myself a training ground manager, so I don’t think it would be for me in the short term, if I was offered the job. In the longer term, though, who knows?

“My first memories of football were imagining scoring the winner in the World Cup final. I’d be surprised if it’s any different for kids now – your country is something you’re very aware of from a young age.

“Ultimately I wasn’t quite good enough, I fell a bit short, so the national team does have a huge allure for me; a huge credibility.”

Eddie Howe made his FourFourTwo debut in issue 5 of the magazine back in 1994. He reflects on his early Bournemouth days and the club’s roller-coaster ride to the Premier League in the June 2019 issue, a 25th anniversary special. We also hail the 101 greatest players of FFT’s lifetime, speak to Leicester playmaker James Maddison, share some rare unseen Pele pictures, ask former Valencia and Middlesbrough midfielder Gaizka Mendieta your questions, and meet YouTube’s maddest fan Mark Goldbridge.