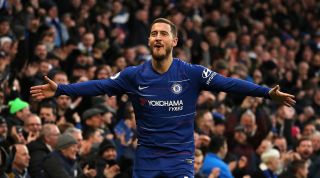 The Belgium international has been heavily linked with a move to the Bernabeu throughout this season, and a deal has finally been agreed between the two clubs.

Hazard is out of contract in summer 2020, but Chelsea were determined to hold out for a sizeable fee after they were handed a transfer ban for breaking FIFA regulations on the signing of under-18 foreign players.

Madrid agreed personal terms with the player several weeks ago and they have now struck a deal with the Blues.

Hazard's final game for the club he has represented since 2012 will be against Arsenal in the Europa League final on May 29.

The former Lille forward will be looking to win his sixth trophy with the west Londoners, for whom he's made 351 appearances and scored 108 goals since his arrival seven years ago.