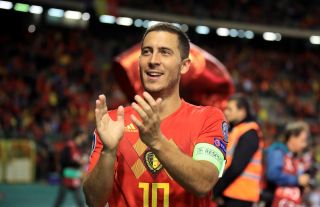 Eden Hazard’s Real Madrid return is like signing a new player, according to manager Zinedine Zidane.

The Belgium international, an £89million arrival from Chelsea in the summer, has not played since the end of November because of an ankle injury.

However, the 29-year-old is back in contention after returning to fitness

“We know what he brings to the team, that’s why we signed him, and now is the right time for him to return,” said Zidane, whose side are top of LaLiga after five successive league wins, ahead of the visit of Celta Vigo.

“I’m very happy that he has returned. After three months out it’s like we have signed a new player.

“We had to be careful with him, give him a little more time and not hurry him back, but he’ll be with us tomorrow. He’s ready to play.”

Hazard’s return is timely as Real are set to face Manchester City in just over a week when the Champions League returns.

The Premier League side are reeling from Friday’s announcement from UEFA banning them from the competition for two years for Financial Fair Play breaches.

However, Zidane does not believe that will have an influence when they meet in Madrid on February 26 and Manchester on March 10.

“I don’t know what’s going to happen. With respect to the sanction I don’t want to get into that matter. It’s not my job,” he added.

“What I’m going to say to you is to talk about football when we play against them. They are a very competitive team, very strong and this isn’t going to change.”

Celta are still in the bottom three despite their surprise win over Sevilla last weekend.

That is their only victory in the last five matches in all competitions but coach Oscar Garcia remains optimistic of producing a shock against the league leaders.

“We go to the Bernabeu with enthusiasm, with confidence and believing that we can win,” he told a press conference.