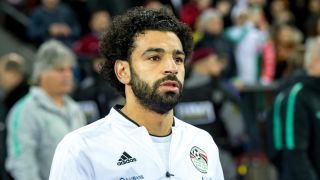 The Liverpool flyer was pictured alongside his Egypt team-mates as they set off for Grozny, where the Pharaohs will be based throughout the tournament.

His mere presence on board the flight appeared unlikely when he left last month's Champions League final in tears after sustaining a concerning shoulder injury.

But Egypt's chief attacker is closing in on a return to full fitness – he joined his team-mates in training on Saturday – and his mood seemed to be sky high ahead of Egypt's first World Cup appearance in 28 years.

Hector Cuper's side first face Uruguay in their Group A opener on Friday before further clashes with Russia and Saudi Arabia.