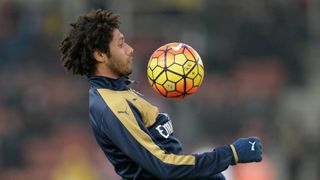 The 23-year-old Egyptian midfielder joined the North London club from Swiss outfit Basel for an initial fee of £5million on January 13 and was an unused substitute for the league clash with Stoke last weekend.

The defensive midfielder could make his first appearance for Arsenal against Burnley in the FA Cup on Saturday and whilst Wenger admits Elneny is not physically dominating, the French boss believes it is not a necessity of the modern game.

"Sometimes they lack a bit of power, so he’s not a powerhouse, he's more of a mobility player. That’s why I think he can suit our game.

"Winning the ball is not only down to power, it’s about switching on at the right moment. It’s a technique.

"It’s a real technique to know when to switch on. I remember small defensive midfielders who were unbelievable defensively. They had that kind of technique."

Wenger feels Elneny has proved himself during his spell in Switzerland and deserves to join an elite European division after his experiences against English competition.

"The next step is a big one for him because to come out of Switzerland and get to the Premier League is not easy but it’s the right age for him."