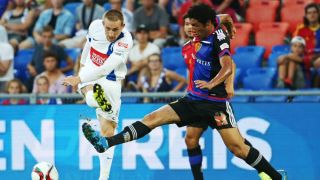 Former Egypt coach Bob Bradley believes Mohamed Elneny's versatility could make him a hit for Arsenal in the Premier League.

The 23-year-old completed a move to the Emirates Stadium from Basel earlier this month and could make his debut for the Gunners in Sunday's clash with Chelsea.

Elneny fulfilled a variety of midfield roles during his spell with the Swiss champions and Bradley, who coached him at international level between 2011 and 2013, says the former Al Ahly trainee will offer much more than tough tackling for Arsene Wenger's side.

"He is an all-round midfielder capable of playing different roles," Bradley told NBC Sports' Pro Soccer Talk. "He reads the game, he moves well and he can play a little bit deeper.

"He's an all-round midfielder who can play deeper when needed, he can move forward and shoot from distance but he's not just a guy who stays in there and breaks up plays.

"When Elneny started he was still young, he was only 19, but you could see that he trained really well every day.

"In training he was improving technically. You could tell how he worked and how he wanted to get better. Little by little he became an important part of our team.

"His passing got sharper. He started to improve his ability with long passes. He was always a player who didn't hesitate to shoot from distance and at that time it wasn't always that he was scoring a lot, but you could see all these starting points."

Bradley believes Elneny's experience in European competition for Basel will help him to become accustomed to the English top flight quickly.

"It is an adjustment for anybody but I think that his experience of playing against Premier League teams in the Champions League and Europa League is going to help," he added.