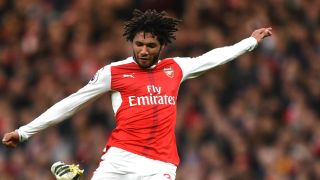 Arsenal manager Arsene Wenger says Mohamed Elneny was substituted before half-time of Wednesday's EFL Cup defeat to Southampton because he was struggling with illness.

Elneny was withdrawn in place of Granit Xhaka after 43 minutes of the quarter-final contest at Emirates Stadium, which Saints won 2-0 thanks to goals from Jordy Clasie and Ryan Bertrand.

And Wenger revealed after the game that the Egypt midfielder had been unwell, but put himself forward to play.

"He was sick before the game. He decided he felt well enough," Wenger said.

"I could see after five or 10 minutes that he was not right. He has no medical injury problem, but he has diarrhea or a stomach problem."

Wenger also stated that he is unsure when influential midfielder Santi Cazorla can return to first-team action.

The Spain international has not featured since the 6-0 Champions League drubbing of Ludogorets in October due to a problematic Achilles injury.

"Cazorla I don't know, honestly," he added. "It's just inflammation. It can go in two days, two weeks - I don't know.

"He has no setback, the inflammation is just still here. At the moment, it's stable."