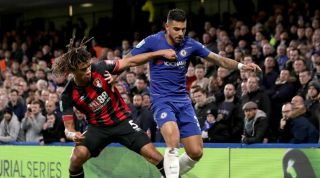 The 25-year-old Emerson worked under the Italian during Sarri's single season in charge at Stamford Bridge in 2018/19.

Left-back is a problem position for Sarri at Juve as Alex Sandro is his only natural option in the role.

Midfielder Blaise Matuidi was forced to fill in recently after an injury pile-up, and the Express believes that the Italian champions are interested in a mid-season move for Emerson.

The Italy international began the season as first-choice left-back for Frank Lampard but has been sidelined with a hamstring injury.

Chelsea want to hand Emerson a new five-year contract and the club’s transfer ban provides them with another reason to try to hold on to the player.

FIFA handed the Premier League club a two-window ban from signing players after they broke rules on the signing of youth talent.

They are currently midway through the punishment as they await the result of an appeal to the Court of Arbitration for Sport.

Former Roma and Palermo defender Emerson made 27 appearances in all competitions under Sarri last season and played a key role in their Europa League triumph.

The left-back provided an assist during the 4-1 win over Arsenal in Baku to clinch his first major European honour.

Emerson joined Chelsea from Roma in January 2018, winning the FA Cup in his first season before triumphing in Europe and finishing third in the Premier League under Sarri last term.

He has established himself as Roberto Mancini’s first-choice option on the left side of defence for the Azzurri during their Euro 2020 qualifying campaign, featuring in Italy’s last four qualifiers and providing two assists.