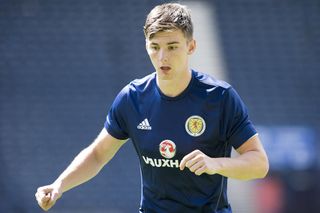 Unai Emery has asked Kieran Tierney not to link up with the Scotland squad next week to benefit his comeback from injury at Arsenal.

The 22-year-old made his Gunners debut in the 5-0 Carabao Cup win over Nottingham Forest, having joined from Celtic in the summer.

A niggling groin problem meant the left-back could not come straight into the Arsenal side but, after making his bow, Tierney then missed out on the squad for Monday’s draw at Manchester United.

Emery insists there is no new injury and said he wants Tierney – who is set to start Thursday’s Europa League clash with Standard Liege – to remain at the club’s London Colney training base over the international fixtures, rather than risk a setback if he were to join up with Steve Clarke’s Scotland.

Asked if he had spoken to Clarke about the situation, Emery replied: “No, I asked Kieran yesterday because we are waiting first for him to be with us consistently playing and after his injuries each step is important.

“For example, he didn’t play in Manchester because he had some small problem, not important, but the doctor told us it is better to be here working alone and preparing for tomorrow’s match and if we here are with him taking precaution, it is also important for the national team.

“We are thinking it is not the moment to work with them (Scotland) for the next matches.

Emery is expected to rotate his side having only played at Old Trafford three days before the visit of Liege.

The likes of Gabriel Martinelli and Reiss Nelson will be pushing for a rare start, with Mesut Ozil also likely to come into the side.

Emiliano Martinez will start in goal, the 27-year-old having been called into the Argentina squad for the first time in over eight years.

Having joined Arsenal in 2010, Martinez has spent several seasons away from the Emirates Stadium out on loan before becoming Emery’s back-up to Bernd Leno this year – with Martinez confident he is good enough to earn the role as first-choice for both club and country.

“Yes, of course,” he replied when asked if he believes he is the best goalkeeper at the club.

“If you want to be Arsenal number one you have to believe in yourself no matter what. I believe in my talent, my work.

“Since I signed for this club my goal was always to be number one. I’ve been here almost 10 years already, I came as a young boy and now I’m a grown man.

“I went on loan quite a few times, some good, some bad. But at the end of the day, my work ethic and commitment was to always be the number one for Arsenal and for the national team.

“That’s the dream that I said to my dad that I’m going to do. I won’t stop until I’m the number one for Argentina.”