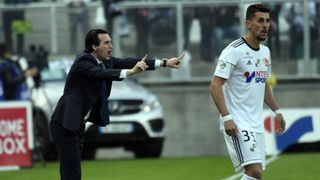 Paris Saint-Germain coach Unai Emery is hoping for "good news" on the fitness of Neymar ahead of the Coupe de France final.

Neymar is this weekend returning from Brazil, where he has been rehabilitating after surgery on a fractured metatarsal sustained in February.

PSG head into Tuesday's clash with third-tier side Les Herbiers at Stade de France having failed to win either of their matches since Emery announced he will depart at the end of the season – they drew 2-2 with Amiens on Friday having held Guingamp to the same scoreline five days prior.

The Spaniard previously expressed a desire to see Neymar back on the pitch for the Ligue 1 champions before the end of the season and is keen to see what condition the Brazilian is in.

"We will see. We made the trip to here and played the match; we will have to see how [Neymar] is and if there is good news," Emery told Canal+.

"We will continue to train and we will see how the players who played [against Amiens] are.

"I am happy to see that many players have played with the desire and motivation to keep up the same pace [despite having sealed the title]. We will see how they are and then we will think of the Coupe de France, which is important for us.

"We will look to have the best available XI to play in this game."

Despite struggling to contain Amiens at times on Friday, Emery was also adamant that PSG deserved victory.

"[Amiens] were effective to score two goals from fewer chances, but I am 80 per cent happy with the match," he said. "We created a lot of opportunities and deserved to win."