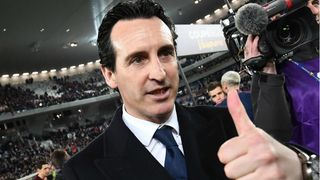 Unai Emery said he has enjoyed his time at Paris Saint-Germain as the outgoing head coach prepares to leave the French champions with a smile on his face.

Saturday's Ligue 1 clash at home to Rennes will be Emery's final match in charge of the domestic treble winners.

PSG failed to make an impact in the Champions League, though, suffering consecutive last-16 exits under the Spaniard.

However, former Sevilla boss Emery insisted he will be all smiles as he reflected on his PSG tenure.

"I have always enjoyed my time as head coach during my entire career. Football is my passion and I love my job. I'll keep doing so," the 46-year-old told reporters.

"I've enjoyed it here and I'll enjoy tomorrow. I want to win. My goal is that the team wins and plays well. I want all the fans to enjoy the way the team plays.

"I'm really proud to be here with all the players and the staff working at PSG. Today we played a game between us, with the people working here. I have a good relationship with everyone in the club and the president. That's why I want to thank everyone and also you the journalists. You've been with me many times.

"We'll keep going ahead. Tomorrow we have the game. I'll be smiling but I'll keep in mind I have the responsibility that we need to do a good job."