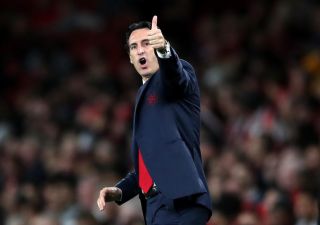 Former Arsenal boss Unai Emery has accused some of his players of not having “a good attitude” in a stout defence of his 18-month reign at the Emirates Stadium.

The Spaniard was relieved of his duties in November last year after a run of seven games in all competitions without a win, with the Gunners eight points adrift of the Premier League’s top four.

He departed amid claims that he had struggled to motivate the club’s biggest names, although he has hit back at those suggestions and insisted he was turning things around.

Emery told France Football: “Arsenal was a club on a downward slope for two years before I arrived. We stopped this fall and even began to rebuild the club with the Europa League final and fifth place in the league, only one point off Tottenham despite the fact that we took just one point in our final five matches.

“We had Champions League qualification in our grasp and it went wrong in the end. But it was a good season and we had this notion of continuing to improve.

“But we lost our four captains: (Laurent) Koscielny, (Petr) Cech, (Aaron) Ramsey and (Nacho) Monreal. They were personalities that we missed this season to stay on the right track, and some stars did not have a good attitude and asked for more than what they were giving back.

“Taking all of that into account, we needed time to succeed with our transition to a new Arsenal, which is what I wanted.”

Cech retired at the end of last season, while Monreal, Koscielny and Ramsey left North London for Real Sociedad, Bordeaux and Juventus respectively.

Meanwhile, Emery’s relacement Mikel Arteta believes the club’s “mini pre-season” in Dubai will stand them in good stead for the remainder of the campaign.

The Gunners have spent the last few days in the United Arab Emirates, making the most of having no league fixture last weekend.

Newcastle are Arsenal’s first opponents after the mid-season break, with Steve Bruce’s side visiting on Sunday.

It will be the start of a hectic schedule for Arteta’s side with games coming in the Premier League, Europa League and FA Cup between now and the start of March.

The Spaniard hopes the warm-weather training camp in the Middle East helps get his ideas across quicker to ensure they start moving up the table from 10th position.

“We cannot be any happier with the conditions for us to train,” he said. “We came here to work, it was like a mini pre-season.

“I wanted to use it to work on our principles and our styles of play, and as well how we live together.

“There are things I want to implement together as a group, not just for the players but for the staff as well. It has been really useful.

“We had good reason to come here. We are really happy that we made that decision. We came here to work, it was not a holiday.

The initial goal for the former Arsenal midfielder will be to get the Gunners back into Europe’s elite competition before they can start challenging for the title again.

After helping Manchester City win the Premier League during the last two seasons as Pep Guardiola’s assistant, Arteta is well placed to know what it takes to guide a team to the title.

On what Arsenal need to achieve that, the 37-year-old said: “100 points? Maybe 105 points? We can do it in many different ways.

“At the moment we are far from it, but we need to go step by step because this club deserves nothing else than that.”