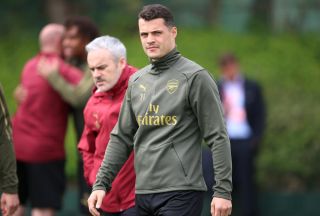 Unai Emery has refused to confirm whether Granit Xhaka will retain the Arsenal captaincy or if he will face punishment for swearing at supporters – but called for him to issue an apology.

The 27-year-old was jeered as he was substituted in Sunday’s 2-2 draw with Crystal Palace and responded by waving his arms, cupping his ears and mouthing “f*** off” before refusing to shake Emery’s hand and taking off his shirt as he headed straight down the tunnel.

Speculation was rife as to whether Xhaka would lose the armband as a result of the incident but, despite speaking to the player on Sunday, Monday and Tuesday, Emery would not be drawn on if a decision had been taken and instead focused on the well-being of his skipper.

“At the moment, I am not speaking and I don’t want to speak about that. The first is for him to recover,” the Gunners’ head coach replied when asked if Xhaka would remain as captain.

“Now he is upset, devastated and sad. It is not only yesterday and today. He is feeling the supporters don’t like him.

“We spoke yesterday and on Sunday night and also spoke this morning.

“He trained as normal with the group but he is devastated and he is sad about the situation.

“His commitment with the club is a great commitment every time. He wants to help.

“His behaviour was perfect in training, with the group and with the club. He knows he was wrong.

“He was wrong and he feels it inside very deeply. But that is normal as a human. You need – and every player needs – the supporters’ support.”

Emery refused to be drawn on whether Xhaka had been fined or would face other internal disciplinary action but did say he felt the Switzerland international should offer an apology for his actions.

Spot the difference on Granit Xhaka's Instagram profile – one from this morning, the other from now…#AFCpic.twitter.com/PqBRcjwXPq— Mark Mann-Bryans (@MarkyMBryans) October 29, 2019

Asked if he felt Xhaka should have said sorry, he replied: “Yes.

“I think when we make individual mistakes, we need to make apologies for the circumstances. I prefer to do that. We suggest to him to do it.”

Emery confirmed Xhaka will not travel as part of the squad to face Liverpool in the fourth round of the Carabao Cup on Wednesday night – insisting that decision had been taken before Sunday’s antics.

But one player who will be at Anfield is Mesut Ozil, the 31-year-old having been absent from every matchday squad since starting the third-round win over Nottingham Forest on September 24.

“We have had this morning a very good conversation, Mesut and me, and I said to him I haven’t changed my idea about him.

“He knows what I want from him because it’s the same as last season on the first day of pre-season training when we had a conversation.

“We need his quality, his skill and his consistency. We need his positive mentality and then he will help us on the pitch.

“That’s the next step. I think he’s done the steps before, and now I want the steps like in pre-season and one month ago to help us on the pitch.”