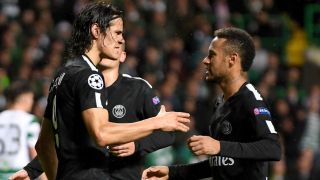 Unai Emery expects Edinson Cavani and Neymar to come to an agreement on penalty-taking responsibilities after the pair argued over a spot-kick during Paris Saint-Germain's win against Lyon.

PSG continued their 100 per cent start to the Ligue 1 season with a 2-0 victory at home to Lyon thanks to a pair of own goals, a result somewhat overshadowed by a disagreement between star forwards Cavani and Neymar.

Cavani and €222million arrival Neymar quarrelled over a penalty in the 79th minute – the Uruguayan eventually winning the argument with his new team-mate but missing from the spot.

PSG head coach Emery said he wants to leave it up to Cavani and Neymar to decide on the spot-kick duties but he will intervene if necessary.

"The penalties are to be struck by a few players, one is Cavani and the other is Neymar," Emery said.

"It takes a gentleman's agreement on the ground to hit the penalties.

"Afterwards, we will arrange internally for the penalties that are coming in, because I think both are able to score them, and I want the two to alternate in this exercise.

"If there is no agreement, I will decide. I do not want it to be a problem for us."

On the match itself, Emery added: "We respect the championship, and last season we suffered both matches against Lyon. Today [Sunday] I wanted to win with less difficulty, but I recognise the reality, we must learn to suffer and win with difficulty.

"Of the 90 minutes, the team deserved to win. Lyon had opportunities, but over 90 minutes we did more than them."

The defeat was Lyon's first of the campaign and they will be disappointed not to have left the capital with at least a point after an impressive display.

Bruno Genesio refused to be too despondent, though, excited for what the rest of the season will bring if they continue to perform in such a positive fashion.

"We leave disappointed because we deserved better," he explained.

"We had the opportunity to score and we paid for one or two mistakes. Nevertheless, we can be very positive about what we did tonight. If we reproduce this, we can think about beautiful things that await us this season."