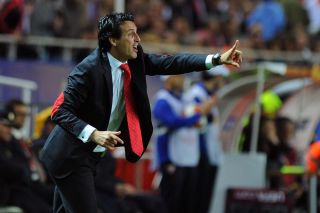 First-half goals from Stephane MBia and Carlos Bacca ensured Sevilla left the Estadio Ramon Sanchez Pizjuan with a two-goal advantage ahead of next week's second leg.

It is an old saying that a two-goal lead in football is the worst a team can have, and Emery was under no illusions their lead was not a tie-winning one.

"We certainly don't have a foot in the final after that match, there is still a lot of time to go, 90 minutes is a long time," Emery said.

"We want to live the moment, take advantage of the moments and work hard during other moments.

"We don't want to think about or try to predict the consequences of anything.

"Now we will focus on the Bilbao match (in La Liga) coming up this weekend and carry on with the continuation of our week as planned.

"I'm going to insist on this, we have plenty of respect and we will be prudent, because we are aware of the fact that a 2-0 scoreline can be overturned and we've seen that happen before.

"In order to qualify we will need to show up with the best version of our team and ensure that Valencia don't have the chance to get back into this game."

Emery said Valencia's complaints the referee influenced the result were misguided, with MBia's opening goal allowed despite a strong appeal for offside.

"The offside call shouldn't affect the return leg, but it's true that the foul was clear, just as the penalty for the handball in Valencia's box," he said.

"These kinds of things can happen to anyone and we need to rise above.  We need to support the referees, who are trying to do the best they can with the fewest mistakes.

"There will be another referee, another match and another context.

"I don't the referee was decisive, although it's true that it was an important goal.  The team was creating chances and improving.  I think the momentum of the game shaped what was happening."