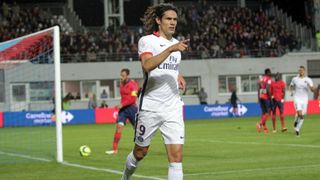 Paris Saint-Germain boss Unai Emery is on the hunt for a new striker to complement Edinson Cavani.

The Ligue 1 champions saw record goalscorer Zlatan Ibrahimovic depart at the end of the season before signing a one-year contract with Manchester United.

Cavani has spent much of his three-year spell at Parc des Princes playing in a wider role to accommodate Ibrahimovic as a central striker, despite the Uruguay international's frustrations, particularly last term under Laurent Blanc.

The former Napoli star is expected to lead the line under new head coach Emery, but the 44-year-old is eager to recruit more options in attack to take some of the pressure off Cavani's shoulders.

"Cavani has played on the left a lot, he has to feel like he will be a centre forward, but we're short on other players like him in attack," he told L'Equipe.

"It's very important for me to think carefully without pressure. If Cavani is injured, for example, we'll need a player capable of playing for PSG."

Sevilla striker Kevin Gameiro has been linked as a possible option, along with Gonzalo Higuain, although the Napoli striker is expected to join Juventus in the coming days.

Another option at Emery's disposal is Jean-Kevin Augustin, who finished as top scorer at the European Under-19 Championship this month, firing France to the title with six goals.

"He brought us a lot during this tournament," coach Ludovic Batelli was quoted as saying by L'Equipe after France beat Italy 4-0 in the final.

"But it's not up to me to say whether he should play at PSG this season. The door to a higher level is going to open at some time – that's certain.

"From this Euros, I'll remember above all that he's a talented, smiling and attentive player."