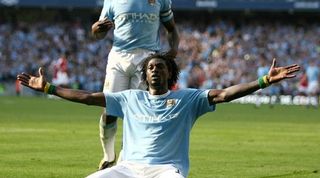 The Togolese striker memorably sprinted the length of the Etihad pitch to celebrate in front of the travelling Arsenal fans on 12 September 2009, just months after departing north London for City.

They took it so well. pic.twitter.com/B7ahsZLytG— FourFourTwo (@FourFourTwo) September 12, 2019

He was slapped with a two-match ban and a £25,000 fine by the FA for his actions but appears to have no regrets.

Adebayor, who is now 35 and plays in Turkey with Kayserispor, marked the 10-year anniversary with a mischievous Instagram post, predictably prompting a string of angry reactions from Arsenal supporters.