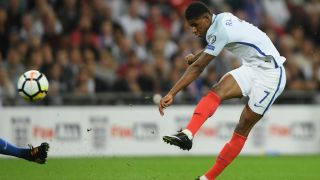 Marcus Rashford's first goal at Wembley ensured England remain in control of their World Cup qualification destiny after coming from behind to defeat Slovakia 2-1 on Monday.

Stanislav Lobotka gave the visitors a surprise early lead in London to leave manager Gareth Southgate and his players with plenty of cause for concern.

However, Tottenham midfielder Eric Dier equalised with a well-taken finish from a corner in the 37th minute.

And Manchester United forward Rashford, who was dispossessed in the build-up to Lobotka's strike, made amends for his earlier error by firing home what proved to be the winner from outside the area a minute before the hour mark.

The result sends England five points clear at the top of UEFA Group F with two matches in October remaining, at home to Slovenia and away to Lithuania, with their place at the finals in Russia appearing increasingly assured.

That's it! The show bravery to come from behind and beat Slovakia to move clear at the top of our group. September 4, 2017

Slovakia meanwhile remain second but are now just one point clear of both Scotland and Slovenia, with a showdown against Gordon Strachan's men looming at Hampden Park next month.

The visitors' first real sight of goal produced the opener in just the third minute, with Rashford guilty of losing possession while covering Kyle Walker.

Celta Vigo midfielder Lobotka exchanged a sharp one-two with Adam Nemec, receiving the centre-forward's perfectly weighted return pass to get beyond the England defence and dink the ball past Joe Hart.

England slowly began to assert themselves after that early setback, creating chances for Dele Alli, Alex Oxlade-Chamberlain and Rashford without success.

The promising United youngster, seeking to atone for his earlier error, was involved in the build-up to England's equaliser.

Rashford slipped Harry Kane into a dangerous position inside the area and the Tottenham striker could have gone down under a challenge but instead won a corner with a deflected strike.

Spurs team-mate Dier got to the ball first from the subsequent set-piece, sweeping a well-timed finish on the half-volley into the roof of the net at the near post.

England kept the pressure on after the break, Jordan Henderson dragging a snap shot wide and Oxlade-Chamberlain forcing a save at the near post.

The pressure told in the 59th minute, when Alli fed Henderson and the Liverpool and England captain in turn found Rashford.

Slovakia's defence afforded the teenager too much space and he duly picked out the bottom corner of goalkeeper Martin Dubravka's net from outside the area.

Slovakia, having earlier called Hart into action when Marek Hamsik found Nemec temporarily free of the attentions of Phil Jones at the back post, struggled to mount a response to falling behind.

Instead it was England who went closest to scoring again, substitute Raheem Sterling driving at goal and testing Dubravka with six minutes to go, the hosts ultimately winning in relative comfort.