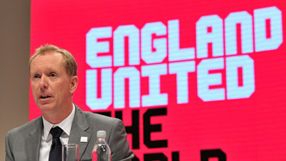 Buoyed by a positive report from FIFA's inspectors, who had earlier given England's proposals an encouraging "low risk" rating, bid chief executive Andy Anson said the state-funded broadcaster's plans to screen a Panorama documentary regarding allegations of FIFA corruption smacked of "sensationalism."

Asked how frustrated he was that British taxpayers' money was being used to make a programme by the BBC that could undermine the bid, he replied:

"I am incredibly disappointed with the timing of what the BBC seem to be proposing with Panorama.

"If they truly believe there is a journalistic reason to run this programme, then they could have done it any time in the last two years.

"To do it the week before the vote is about one thing and that's sensationalism. I don't think that's helpful and I don't think it's patriotic."

A BBC News spokesman said: "The findings of the Panorama investigation into FIFA will be in the public interest."

Anson, asked to comment on the fact the programme is looking at how much England's bid will cost, added:

"The time to look at that was when we chose the host cities. If they really cared about that, the time to do it was then, not with two days to go (before the vote on December 2)."

Anson said when he went to see Mark Thompson, the BBC's director general, he did not ask him to stop the broadcast of the programme.

"I did not ask him to do that, I just told him what the potential implications of doing it would cause."

Anson said that although he did not know exactly what the BBC were intending to broadcast, he did know the contents of letters the broadcaster had sent to FIFA executive committee members it wished to interview.

"We know what the letters all ask about... the issues seem to be things dealt with by the Swiss courts and by FIFA in the past. They're not happy with someone raking over old issues but then, no one would be.

He said that although the BBC are partly publicly funded it was not up to the government to stop the programme which, he believed, contained little in the way of new information.

"It is not up to the government to stop the programme. The government has been unbelievably supportive of the bid.

"We have a free media in this country and the BBC can do what they want, I just have to make sure they understand my view of what they are doing."

Despite the potential problems pose