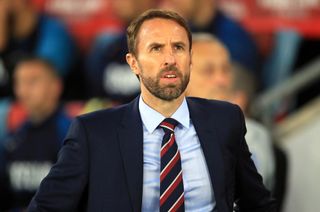 Gareth Southgate is pleased by the way England’s youngsters are progressing and believes the frenetic win against Kosovo will serve them well.

Gone are the days where profile led to selection for the Three Lions over potential, with four players aged 22 or under starting Tuesday’s Euro 2020 qualifier in Southampton.

A further two in that age bracket came off the bench in the 5-3 victory over a Kosovo side who ruthlessly punished individual mistakes at St Mary’s, with Michael Keane and Harry Maguire errors bookending a sloppy Declan Rice mistake.

“I think it’s still really early stages of Declan’s international career, and he’s given two really mature performances,” the England boss said. “Although he played in the summer (in the Nations League), he’s still such a young player.

“You want to be able to get them all into the game, and maybe at 5-1 or whatever we were, our intentions would have been to do that. At 5-2, 5-3, then you’re thinking, ‘Hmm, OK, how do we actually affect the game?’

“We felt, in actual fact, we were still a huge threat with the ball, and we didn’t really feel the need to take a step back because we weren’t structurally defending poorly, we’d just made some crazy errors.

“So, at some of those moments, rather than change something for the sake of it that actually might influence it the wrong way, we left it because we thought generally speaking that was the best way to see out the game, and then I felt (Ross) Barkley and Sancho had just started to physically tire at the end and the two lads came in and saw the game out well.

“But in terms of the young players, there still won’t be many teams in the top tier of European sides this week who have played as many under-22/23s as we have, I would imagine.”

Tuesday’s qualifier certainly appeared more beneficial than Saturday’s 4-0 thrashing of Bulgaria at Wembley, where the visitors sat deep and only fleetingly threatened on the counter.

Kosovo, by contrast, attacked England at St Mary’s and posed different problems, while their second-half wobble raises questions about the young group’s game-management.

“I don’t think (the errors) are inevitable because even for a young side we shouldn’t have been making the mistakes that we made,” Southgate said.

“But it’s not a bad thing for them to go through, to experience that.

“We’ve had a lot of qualifying games that have been a breeze and (against Kosovo) they’ve had a different sort of test.

Solid international break with the lads. Lots to work on but good to win 2 out of 2! 🦁 @Englandpic.twitter.com/dsDQccV190— Mason Mount (@masonmount_10) September 11, 2019

“And the only way for them to mature and learn and improve is to go through those sorts of situations.

“I mean, you would still feel a two-goal lead… from the side, we’re thinking we’re still in control of the game, but on the pitch that can feel a little bit differently.

“They’ve got to feel that and have to respond to that. We’ve learned a lot from individual and collective responses to those moments (on Tuesday night).”