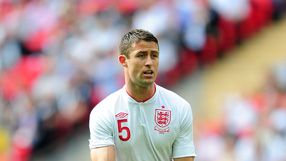 Coach Roy Hodgson said last week that he had some concerns about his defence and the Group H World Cup 2014 qualifier would do little to help him narrow down his options after Terry's angry retirement amid a racist abuse row.

Anything other than a very handsome victory against the team 207th and joint-bottom of FIFA's world rankings will represent disappointment for England in one of the most ill-matched fixtures in the qualifying programme for the finals in Brazil.

England, ranked fifth, are in a process of rejuvenation and some inexperienced players could get a run-out at Wembley - even if Hodgson has been robbed of Manchester United defenders Phil Jones and Chris Smalling through injury.

"We believe there are two very interesting centre halves in Jones and Smalling, both of whom have not been available to us so I think our current plight, if it is a plight, is one that could rapidly change by next March," Hodgson told reporters as he assessed his defensive plans.

The build-up to the game has been overshadowed by the fall-out from the FA finding Terry guilty of racial abuse towards Anton Ferdinand a year ago and the revelation from Hodgson, made on an underground train, that Anton's 33-year-old brother Rio would not be picked.

Terry, who won 78 caps during an eventful nine-year international career in which he was twice stripped of the England captaincy, announced he was quitting international football two weeks ago - shortly before the FA hearing.

His Chelsea team-mate Ashley Cole, whose evidence on Terry's behalf was questioned in the published findings of the case, is facing a misconduct charge for sending an offensive tweet about the FA and has until Thursday to appeal against that charge.

Cole has 98 caps and is in line to become only the sixth English player to play 100 times for his country but it is uncertain whether he will play on Friday despite apologising in person for his Twitter outburst to FA chairman David Bernstein.

There is no shortage of candidates for his left-back position with Everton's Leighton Baines, who has enjoyed a fine season, and Chelsea's Ryan Bertrand waiting in the wings.

Like Cole, an injured Terry missed England's 1-1 home qualifying draw with Ukraine a month ago when Phil Jagielka and Joleon Lescott played in the centre of the defence.

It remains to be seen if Hodgson retains that partnership on Friday or includes Gary Cahill or the uncapped Ryan Shawcross.

Captain Steven Gerrard is suspended but will return for Tuesday's far tougher qualifier against Poland in Warsaw. Frank Lampard is expected to take the armband.

"We have enough leaders," Hodgson said.

"We also have people like Phil Jagielka, Michael Carrick, Joleon Lescott, Ashley Cole and Glen Johnson. Who knows which of these younger players emerge as leaders?"

San Marino, who have lost their last 49 matches since a 2-2 draw with Liechtenstein in August 2003, have only won one of the 113 internationals they have played - a 1-0 friendly victory over Liechteinstein a year after their dra