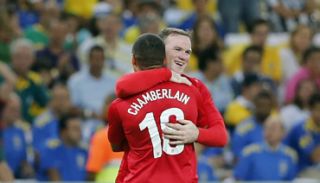 The 2014 World Cup hosts produced probably their best 45 minutes since Luiz Felipe Scolari took over as coach last November as they pulled England apart in the first half but failed to score.

The second half was a different story and they needed an 82nd minute equaliser from midfielder Paulinho to rescue them, three minutes after Wayne Rooney gave England a shock lead on their first visit to Brazil since their famous win at the old version of the stadium in 1984.

Fred had put Brazil ahead in the 57th minute and teenage substitute Alex Oxlade-Chamberlain pulled England back into the game with a superb goal only five minutes after coming on.

Brazil, whose last match at the old Maracana was a goalless draw against Colombia in a World Cup qualifier in 2008, have drawn four of their six games since 2002 World Cup winner Scolari returned for a second stint.

Their only win was against Bolivia and their only defeat against England at Wembley in February.

"In the first half, we were very excellent but the second half was what I don't like and don't want. Our team was very open, giving our opponents the chance to dominate the game, play and score their goals," Scolari told reporters.

With Brazil's preparations for next year's tournament plagued by delays and political rows, attention was focused as much on the venue as the match itself.

England's visit marked the end of a long drawn-out, $500-million programme to modernise the arena which will host seven matches at the 2014 World Cup, including the final.

Although the pitch was in good condition, the atmosphere was hugely disappointing, with large parts of the game watched in near silence, a far cry from the passionate crowds at big domestic games.

The crowd was also fickle, viciously booing Scolari and cries of "donkey, donkey" echoed around the stadium during the second half.

"Of course, the crowd expected the team to win, they wanted goals and a victory, but we understood that England are a difficult team to play against," said Scolari.

Brazil opened up the England defence almost at will in the first half, forcing goalkeeper Joe Hart to make a series of brilliant saves.

Neymar, who has struggled against top European sides, this time lived up to his billing as Brazil's great hope for the future, tormenting the England defence with his running and trickery.

Oscar was also inspired as Brazil created chances almost at will and Hulk added a powerful presence.

Fred's goal, from a rebound after a looping Hernanes shot struck the crossbar, appeared to put Brazil in control but instead England came to life after Oxlade-Chamberlain entered the fray in the 62nd minute.

He equalised within five minutes when he fired in a low shot from the edge of the area after the ball was teed up by Wayne Rooney.

England then enjoyed a purple patch, creating several chances, before Rooney collected the ball near the touchline, cut inside and scored with a looping, deflected effort from around 25 metres in the 79th minute.

Brazil were heading for their first home defeat since they were beaten by Paraguay in 2002 until Paulinho cleverly hooked in the equaliser.

"I was disappointed today. We played so well in the second half I thought we might hold on for the win but we were scotched by a wonder-strike. We didn't play anywhere near like we wanted to in the first half and Brazil did, so it was a fair result."