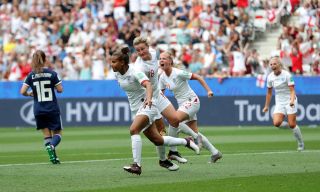 England made a winning start to their Women’s World Cup campaign as they saw off debutants Scotland 2-1 in Nice.

In front of a crowd of 13,188 at the Allianz Riviera, Nikita Parris put the Lionesses ahead with a 14th-minute penalty awarded for handball via VAR and Ellen White’s curled finish made it 2-0 in the 40th minute.

Having looked very much in control for most of the game, Phil Neville’s team, who were denied by some fine Lee Alexander saves and had two efforts chalked off for offside, then endured a nervy finale after Claire Emslie pulled a goal back with 11 minutes remaining.

While Scotland could not save themselves from defeat, they will take heart from their efforts in their first Women’s World Cup finals appearance, two years after being thrashed 6-0 by England in the last meeting, at Euro 2017.

The teams next play on Friday when Shelley Kerr’s Scotland face Japan in Rennes before England take on Argentina in Le Havre.