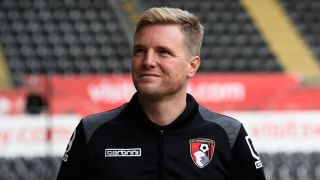 Eddie Howe has laughed off "crazy" speculation linking him with the England manager's job following his success at AFC Bournemouth.

Howe, a former player at Bournemouth, has become a hero at the club after guiding them out of administration and away from the bottom of League Two to the Premier League in just seven years - either side of a short spell at Burnley in 2011-12.

After 15 games in their debut Premier League season, Bournemouth sit 17th - outside the bottom three on goal difference - and their style of play has seen Howe attract numerous plaudits.

Although the 38-year-old is flattered to be linked with the England job, he believes it is far too soon for such speculation to have any credibility.

"I have never given it any thought but if I am fortunate enough to be in work in a few years' time then... I’m very patriotic and it would be the ultimate honour," he told the Daily Mail.

"I would love to be thought of as good enough in the future.

"I've won three games in the Premier League as a manager, so it's crazy to talk about England."

"We are proud to be hosting Manchester United, it's a big game in the club's history," he told Friday's pre-match news conference.

"I watched their Champions League game [a 3-2 loss at Wolfsburg], it was a good game, it could have gone either way.

"United are fourth and near the top of the league, we know how difficult this game will be."