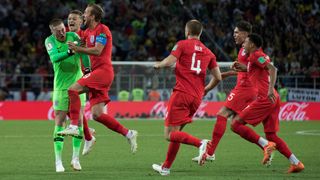 Croatia great Davor Suker believes his nation's semi-final opponents England were "lucky" to survive their last-16 clash against Colombia at the World Cup.

Gareth Southgate's men needed a penalty shoot-out to overcome Colombia in Moscow on July 3, before easing past Sweden in the quarter-finals.

Suker, now the president of the Croatian Football Federation (HNS), feels England were fortunate to get past Colombia.

"I watched England's game against Colombia at the Spartak Stadium in Moscow and you were lucky," Suker, who scored a record 45 goals for Croatia, told the Mirror.

"Colombia had two chances to score to lead in the penalty shoot-out, so you were lucky.

"But why lucky? Because you invested in a lot of forwards and that's what I liked, England at that moment."

Croatia have required back-to-back shoot-outs against Denmark and Russia to reach the last four, meeting England on Wednesday.

Suker believes Croatia's meeting with Southgate's men shapes as being another tight encounter.

"It's football, 11 against 11, 11 warriors. What I would like is the England from before, but now they are very strong and we have to respect them," he said.

"Southgate has done a great job. I have a lot of friends in England and we know each other well. We will spy on each other.

"But I think – and I said the same before the game against Russia – it will be 50-50 against England."