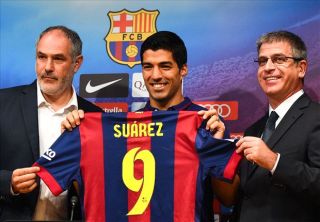 After a strange season of inertia on the pitch and scandal off it, Barca have made a conscious decision to return to their roots - but with a twist borrowed from the most unlikely of sources.

Gerardo Martino is gone, having failed to make his mark in the Camp Nou dugout and, more importantly, its trophy cabinet.

Barca legend Luis Enrique is the new man in charge.

Out goes a foreign manager who lost the dressing room having overseen an under-par season, in comes a Barca icon - a unifying force who, thanks to his feats on the pitch, commands instant respect from players, fans and the media alike.

It should. For Martino in this instance read Frank Rijkaard six years ago.

Luis Enrique, for his part, has the unenviable task of playing the role of a certain Pep Guardiola.

Between 2008 and 2012, Guardiola's Barca practically re-invented the game. They captured hearts and minds and trophies. Lots and lots of trophies; 14 in all, in four years.

The departure of an exhausted Guardiola was the beginning of the end.

Chelsea and Real Madrid proved Barca's previously irresistible style could be nullified before his exit; Bayern Munich ruthlessly showed it could be overpowered 12 months later.

Martino was recruited last year with the intention of providing a clean break from the Guardiola era, but that proved an ill-fated move.

It's easy to see why the present Barca hierarchy are hoping to recreate that golden age, and easier still to see why they have been seduced by Luis Enrique's Guardiola-circa-2008 credentials.

However, under first Sandro Rosell and now Josep Maria Bartomeu, there has been a definitive shift in how the club want to replicate that success.

Gone, it seems, is Barca's unshakeable faith in La Masia - although their much-vaunted youth system may be relied upon over the next year after FIFA upheld the club’s transfer ban for the next two windows.

Last year, Neymar was signed at great expense - both financially and politically, as Rosell resigned as president in the wake of accusations of tax evasion surrounding the deal.

This year, Suarez has been brought in to play alongside Messi and Neymar.

Never mind the fact that the defence has required vast improvement for years, and new recruits Thomas Vermaelen and Jeremy Mathieu are not in the same class as retired skipper Carles Puyol.

Never mind that Xavi - the ideologue of all things Barca over the last decade - is coming to the end of his glorious career.

Neymar and Suarez are superstars. They score goals and they sell shirts. The rest, it would seem, is of little importance to those in the Camp Nou boardroom.

On paper, Neymar, Suarez and Messi form potentially the greatest strikeforce the game has ever seen, but is another world-class forward really what Barca needed?

It all feels a little bit Real Madrid, don't you think?

For years, Barca prided themselves on being the antidote to the bold and brash 'Galactico' recruitment policy employed by Real president Florentino Perez.

But that was then, and this is now. For better or for worse, Barca MkII has arrived.

Sit back and enjoy the ride.