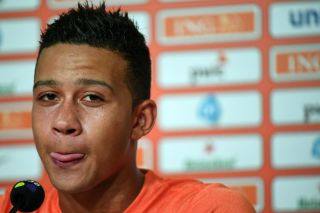 Champions Ajax have started their quest for a fifth successive Eredivisie title in impressive fashion, by beating Vitesse 4-1 and then seeing off AZ 3-1 last weekend.

It is Phillip Cocu's free-scoring PSV side who top the table two games in, though, having put NAC Breda to the sword with a 6-1 thrashing at Philips Stadion last Saturday.

Ajax will be wary of the threat posed by Netherlands winger Memphis Depay, who has further enhanced his growing reputation by scoring four goals in PSV's first two league matches.

Depay is reported to have rejected a new deal with the Eindhoven outfit, amid claims that Tottenham are ready to make a move for the in-form 20-year-old, but Cocu will be hoping the youngster is not affected by talk of a move to White Hart Lane.

Ajax's Denmark midfielder Lasse Schone has also made an impressive start to the campaign, scoring three goals in Ajax's two victories in the Dutch top flight, and on the evidence of the two sides' first two games there should be no shortage of entertainment in the capital.

Frank de Boer's side were 1-0 winners in the corresponding fixture last season to gain revenge for a 4-0 hammering at Philips Stadion earlier in the season, when PSV scored all four goals in the space of 15 second-half minutes.

Groningen and PEC Zwolle have also won both games in an encouraging start to the season and get a chance to make it three out of three on Sunday.

Zwolle host a Vitesse outfit that have picked up just one point from their first two matches and the visitors could hand a debut to new signing Josh McEachran following his season-long loan move from Chelsea.

Groningen take on a Den Haag side who will be looking for their first win of the new Eredivisie campaign at Kyocera Stadion.

Heracles will also attempt to get up and running after suffering defeats in their first two matches when they host Cambuur on Friday, while Willem II go in search of their first points when they entertain AZ on Saturday.

Go Ahead Eagles are the other sides to have been beaten in their opening two matches and will see a home encounter with newly-promoted Dordrecht as a good opportunity to secured a first win.