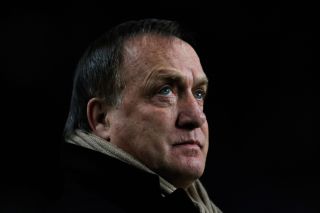 The visitors took the lead just before half-time when Joost Broerse headed a Maarten Martens free-kick past his own goalkeeper, before Nick Viergever struck eight minutes after the interval to make sure of the points.

The result lifts Advocaat's men up to third in the Eredivsie, ahead of rivals PSV Eindhoven, who missed the chance to go top of the league with 2-1 loss away to Roda JC.

The visitors had taken an early initiative after a ninth-minute goal from Tim Matavz, but Roda levelled through Mark-Jan Fledderus midway through the second half.

And things got worse for Phillip Cocu's side when Memphis Depay was shown a second yellow card 20 minutes from time.

Roda duly took full advantage and sealed victory 15 minutes later through Krisztian Nemeth, condemning PSV to their worst run of form in the league since 2004.

There was further concern for Cocu's men in the closing minutes when goalkeeper Przemyslaw Tyton was carried off on a stretcher after colliding with a post.

Meanwhile, 10-man Feyenoord also missed out on the opportunity to claim top spot, losing 2-1 at home to Heracles Almelo, a result that brings their seven-match unbeaten run to an end.

John-Paul Boetius' strike cancelled out Jens Streutker's opener just before the break, but on-loan striker Mikhail Rosheuvel scored in the second half to hand his team their first ever win at the De Kuip.

Feyenoord's top scorer Graziano Pelle could not hide his frustration late on, as he was sent off for a headbutt.

Elsewhere, Vitesse Arnhem played out an entertaining 2-2 draw at home to Groningen in Sunday's late kick-off.

Goals from Mike Havenaar and Davy Propper gave the hosts a 2-0 lead with just over 15 minutes to go, before the visitors staged a superb fightback in the space of just three minutes, with substitute Richairo Zivkovic and Tjaronn Chery both finding the net to earn their side a point.