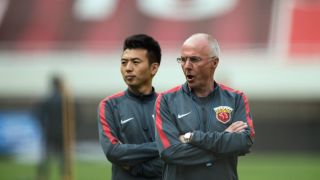 Sven-Goran Eriksson may be a target of ridicule in Europe but the veteran Swedish coach is on the verge of a massive achievement in China, where he has built a club from the ground up and put them on track for the title in the space of a year.

The top two will go head-to-head on Saturday in a match that could decide the title.

Eriksson was cherry-picked from Evergrande's rivals Guangzhou R&F at the end of the 2014 CSL campaign after Shanghai International Port Group (SIPG) took over the club previously known as Shanghai East Asia, rebranded it and relocated it to Shanghai Stadium in the centre of the city.

According to Eriksson's assistant coach Mads Davidsen, who followed him from Guangzhou R&F, the former England, Manchester City and Lazio coach had to start from scratch.

While there were some advantages to such a fresh start - "we could build the training culture we wanted" - Davidsen reckons Eriksson's achievement should not be underestimated if Shanghai SIPG hold off Evergrande and their other CSL rivals to claim the club's maiden title.

"That would be massive, of course," he said.

"I don't think anyone at the club - staff, players - would have believed, if you told us back in February, that 'with six rounds to go, you'll be number one'."

Eriksson has not won a major piece of silverware as a coach since he led Lazio to the Serie A title in 2000, with the 67-year-old's reputation having taken a battering during his time in England where he almost became better known for his string of attractive girlfriends.

But Davidsen insists Eriksson has played a key role in SIPG's success this term.

"He knows exactly what it takes to read a game and to win a game during a game; [he knows] what kind of players do we need for this game; what kind of changes do we need to make at half-time," Davidsen said.

"I don't know how many times we went behind and we changed [the result] after half-time."

A key factor to SIPG's improvement has been Eriksson's enthusiasm for the use of data in coaching, with Davidsen - the club's chief scout and analyst - the driving force behind that.

SIPG have brought in four new imports that have all thrived.

While the success of Dario Conca (8 goals, 12 assists in 23 games) and Asamoah Gyan (4 goals in 6) may have seemed inevitable, Brazilian midfielder Davi (6, 2 in 18) and South Korean centre-back Kim Ju-young have also impressed.

"I built a [statistical] model for Chinese football," Davidsen explained.

"When I look at a player or get recommended a player, then I put this player through my model and see what comes out - I use a lot of statistics, I use a lot of data to support what my football-trained eyes see.

"If [a player] doesn't come out of my model with some high numbers, then I don't recommend we sign him... and this has worked."

Davidsen credits his model for Guangzhou R&F's run to AFC Champions League qualification in 2014 with the likes of previously unheralded imports as Abderrazak Hamdallah and Aaron Samuel Olanare, who both joined from Norwegian clubs, playing up front.