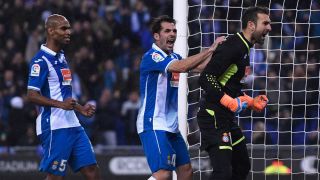 Oscar Melendo's late goal saw Espanyol snatch a 1-0 win and inflict a first defeat on Barcelona since August, after Lionel Messi failed to score a penalty in the first leg of the Copa del Rey quarter-finals.

A dominant Barca looked as though they would have to settle for a goalless draw after Messi saw his second-half spot kick saved by Diego Lopez on Wednesday, but little did they know that things were to get even worse.

Espanyol caught them on the break late on and youngster Melendo provided a neat finish for his first senior goal, inflicting a first defeat on Barca since the Spanish Supercopa.

Barca were on top from start to finish and created more than enough chances to take a victory back to Camp Nou.

But for all their control, the first half proved particularly frustrating, as clear-cut chances were hard to come by and when the visitors did manage to craft an opening, the opportunity was wasted or saved.

They should have taken the lead just after the hour when Messi stepped up from 12 yards out, but Lopez rescued Espanyol with a brilliant save and Melendo – introduced from the bench – struck two minutes from time to secure an unlikely victory for the home side.

Barcelona did not have much trouble taking control of proceedings early on, as they enjoyed a monopoly on possession.

Chances were by no means a regular occurrence, however, with an eighth-minute Sergio Busquets effort that Lopez did well to parry away being the only opportunity at either end in the first quarter of the match.

Messi eventually burst into life in the 23rd minute and managed to charge through a crowd of players to get a shot away, only for Lopez to make light work of the effort.

At the other end, Barca looked almost too comfortable and such a relaxed approach nearly cost them, as Sergi Roberto gifted possession to Gerard Moreno and the forward fired just wide of the bottom-right corner.

The best chance of the half fell to Denis Suarez just before the break, though, as the midfielder received Messi's pass in the area and shot into the side-netting.

Barca's dominance continued into the second half and a moment of Messi magic forced Lopez into action, as the Argentinian flicked the ball over his head and drilled a volley towards the bottom-right corner from 18 yards, with the goalkeeper getting down to keep it out.

Valverde's frustration brought about the introduction of Ivan Rakitic and Luis Suarez from the bench and soon after the Uruguayan's entrance, Barca won a penalty.

Roberto found his way into the Espanyol area and went down under a clumsy Esteban Granero challenge, but Lopez brilliantly denied Messi's kick, getting down to his left and tipping it wide.

In an incident that will likely result in a sanction for Espanyol, Barca goalkeeper Cillessen appeared to get caught in the face by something thrown from the stands 13 minutes from the end.

Thankfully he was fine to continue and he made a strong save to push Marco Navarro's fierce free-kick effort over.

But he was helpless a few moments from the end when Melendo latched on to Navarro's well-placed cut-back and steered a cushioned left-footed finish into the bottom-left corner, ending Barca's 29-match unbeaten run.