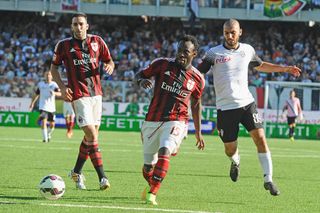 Inzaghi replaced Clarence Seedorf in June after the Dutchman was sacked following a disastrous season that saw Milan finish eighth in the table, and miss out a place in Europe.

The former Milan striker was promoted from the club's youth side to take the role of head coach and Essien has been impressed with the way he has handled the new challenge, likening him to Real Madrid boss Carlo Ancelotti.

"I really like Inzaghi as a coach," he told Sky Sport Italia. "He gives us the freedom to go out on the field and express ourselves, this is why we're giving our best.

"I've had a lot of coaches in my career, and Inzaghi reminds me a little of Ancelotti, who coached me at Chelsea.

"He also gave us the freedom to express ourselves on the field, and that's what Pippo does. I think it's the right way to do things.

"Last season was difficult for us, but now everything is different and things are much better.

"We need to take Milan back to the top. Our aim is to finish in the top three, and we will fight to achieve this goal."

Milan have collected 11 points from their opening six league games under Inzaghi, and sit seven points off leaders Juventus in fifth place.

Verona are their opponents this weekend as Serie A returns following the international break.