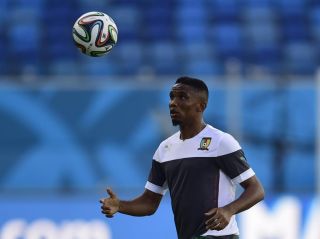 The vastly experienced striker has been without a club since leaving Stamford Bridge at the end of June following the end of a one-year deal.

And Everton manager Roberto Martinez has beaten off competition from a host of rival clubs to secure the services of the 33-year-old on a two-year contract, paving the way for Eto'o to potentially face his former club this weekend at Goodison Park.

Martinez told the club's official website: "For someone who has achieved nearly everything, he still has the desire he had at 15 when he went to Spain and showed what he could do. For many reasons he has got a point to prove.

"We are very excited and I think Everton is the perfect home for him.

"The fans will make him ready and feel sharp but we have got to be a bit patient with the fitness levels and make sure he is back to his best."

Eto'o said: "I had the chance to speak with the manager over the last few days and we agreed that this was what we would do.

"I was impressed with his enthusiasm but also by the knowledge of football that Roberto Martinez carries, his vision of football and how he reads football.

"I still think I can learn a great deal from him here."

Former Mallorca, Barcelona and Inter striker Eto'o has scored over 250 goals in a club career that has seen him win both the Champions League and La Liga three times as well as Serie A, the Coppa Italia, FIFA Club World Cup and Copa del Rey.

Eto'o – who had been linked with Liverpool before the Anfield club signed Mario Balotelli from Milan on Monday - scored nine goals in 21 Premier League appearances for Chelsea last season and will bolster an Everton attack that includes club-record signing Romelu Lukaku.

Ajax also held talks with Eto'o, but he has opted to remain in England.