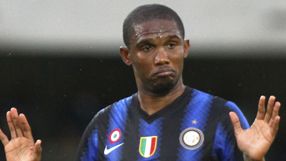 Eto'o was not cautioned by the referee for a headbutt but the Cameroon striker could be punished retrospectively.

"It's clear after a defeat no one is happy but the only thing I can say is the players worked hard and the reaction in the second half on an awful pitch was the reaction we expect," a solemn Benitez, whose side have taken two points from four games, told Sky television.

"What Eto'o did is not something good but he took a punch first and it was provocation. He lost a bit of control, that's clear."

Second-placed Lazio also lost ground on Milan after a 1-1 draw at Parma that left the gap at three points. Milan had beaten Fiorentina 1-0 on Saturday.

Marek Hamsik scored twice as Napoli went third with a 4-1 win over struggling Bologna, who could soon face a points penalty for financial irregularities if a hearing goes against them.

Juventus won 2-0 at Genoa on Sunday to end up fourth and fifth-placed AS Roma beat Udinese 2-0 on Saturday.

With five sides above Inter after 13 games, last season's treble winners have a fight on their hands to win a sixth successive scudetto given their poor form and injuries.

Pellissier's first-half header and Moscardelli's second-half strike secured Chievo's victory, but the game will be remembered more for the actions of the league's top scorer, Eto'o.

In a moment of madness similar to France midfielder Zinedine Zidane's assault on Italian Marco Materazzi in the 2006 World Cup final, Eto'o headbutted Cesar in the chest after being hit by the defender earlier.

The officials missed the first-half incident but Serie A is sure to look at video evidence and will almost certainly hand the Cameroonian a lengthy ban, depriving Inter of their leading striker.

Eto'o netted his ninth goal of the Serie A season in stoppage-time on a rain-sodden Verona pitch, where Italy's rugby side had played last weekend.

Inter had three youth team players on the bench because of their injury problems, which Benitez has said are bad luck and nothing to do with his changing the team's training regime after taking over from ex-coach Jose Mourinho.

Juventus have had a raft of injuries too, but winger Milos Krasic returned from