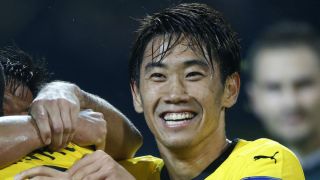 Borussia Dortmund maintained their 100 per cent start to the season with a 2-1 win over Krasnodar in the Europa League, courtesy of a late winner from Park Joo-ho.

The Russian side had taken the lead at Signal Iduna Park, and Thomas Tuchel's charges were far from their free-scoring best, but Matthias Ginter scored in first-half stoppage time to level the scores, before Park capped his full debut with a headed winner at the death.

Napoli ran riot in their Group D opener, as Jose Callejon and Dries Mertens scored twice each in a 5-0 rout of Club Brugge.

The home side were three ahead by half-time after Callejon's chipped opener and Mertens' brace, and Marek Hamsik made it 4-0 before Callejon got in behind the Brugge back four to ensure the scoreline was emphatic.

At the Amsterdam ArenA, Ajax needed a late equaliser from Lasse Schone to salvage a 2-2 draw against 10-man Celtic.

Viktor Fischer cancelled out Nir Bitton's opener early on in the contest, but Celtic led again thanks to Mikael Lustig's headed goal.

Celtic looked on course for a valuable away win until Emilio Izaguirre was sent off for a second bookable offence, and Schone then beat Craig Gordon with a free-kick from a narrow angle.

Liverpool were held to a 1-1 draw in Bordeaux, where Adam Lallana's goal was cancelled out by Jussie's equaliser, and Lazio also failed to get off to a winning start despite Sergey Milinkovic-Savic's first goal for the club, as Yevhen Seleznyov's injury-time equaliser earned Dnipro a 1-1 draw in Dnipropetrovsk.

Tottenham enjoyed a straightforward start to their Group J campaign, as two goals from Son Heung-min and one from Erik Lamela earned them a 3-1 win over Qarabag, and Athletic Bilbao won by the same scoreline against Augsburg, thanks to a brace from Aritz Aduriz and a late strike by Markel Susaeta.

Lacina Traore stepped off the bench to grab a late equaliser for Monaco in their 1-1 draw with Anderlecht, while Molde FK became the first Norwegian team to beat Fenerbahce, running out 3-1 winners in Istanbul.

Elsewhere, Schalke won 3-0 at APOEL, Paulo Sousa's Fiorentina were beaten 2-1 at home by the coach's former club Basel, Villarreal lost 2-1 at Rapid Vienna, and Marseille were 3-0 winners at Groningen.