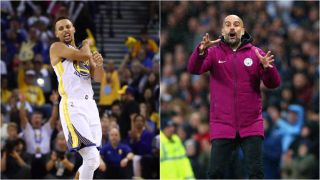 Pep Guardiola believes it is inevitable his high-flying Manchester City side will lose games this season and the keen basketball fan only needs to look to the NBA for an example.

City are five points clear at the top of the Premier League after Saturday's 3-0 victory over Burnley at the Etihad Stadium took them to eight wins and a draw from nine top-flight outings this season.

They have also won three out of three in a Champions League group featuring Feyenoord, Shakhtar Donetsk and Napoli, while scoring an astonishing 42 goals across all competitions.

After the match, talk turned towards the 2003-04 Arsenal side that were dubbed 'The Invincibles' after winning the English title without losing a single top-flight match, but Guardiola was keen to steer the conversation back towards more modest targets.

"The only game I think about is the next one and the next one is against Wolves," he said of Tuesday's EFL Cup fourth-round tie.

"I am happy with the 11 wins in a row because we show we can win a lot of games in a row. That's all.

"To win like this [the Arsenal record] is nonsense, ridiculous, because football today is so demanding and we know exactly that when we don't play good we are going to lose games.

"Tuesday is another game where we have to try to be so serious and play as good as possible to deserve the respect of our opponents. That is all I want and then afterwards we will see."

The Golden State Warriors have been the NBA's dominant force over recent years, with Stephen Curry inspiring them to championship glory in two of the past three seasons.

But Steve Kerr's team were beaten by the Houston Rockets and the Memphis Grizzlies as their 2017-18 regular season got off to a shaky start this week, and Guardiola expects to be overseeing similar challenges in the near future.

"I'm pretty sure, to finish unbeaten, that is not going to happen," he said.

"We have a lot of games in a lot of competitions. Today it is so demanding, more than ever.

"To be focused every three days during 10 or 11 months, always there will be a moment when we are going down.

"In that moment, I will test myself as a manager and I am curious to see how we are going to react in that situation.

"Even Golden State Warriors sometimes lose a game. Everybody loses games and in our case that is going to happen."

However, Guardiola refuted the suggestion that complacency could be the undoing of a City side sweeping all before them at present, with memories of fading from contention after 10 wins in succession last season still fresh.

"With me that is not going to happen," he said sternly.

"We are going to lose games, of course. But to be relaxed and believe really what we are not, that is not going to happen with me."