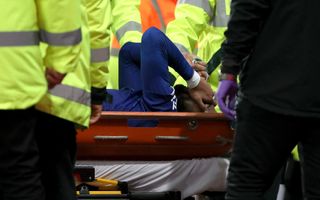 Carlo Ancelotti hailed Andre Gomes’ “amazing recovery” as he revealed the Everton midfielder could return to action before the end of the month.

Gomes was expected to miss the rest of the season after he suffered an horrific fracture dislocation of his ankle in the 1-1 draw with Tottenham on November 3.

But having joining first-team training earlier this week, Gomes is now targeting the match against Arsenal on February 23 for his return to action.

“It was a really bad injury but all the work the staff did was fantastic,” Ancelotti said. “I was surprised that he started to train again with the squad so quickly.

“The plan is to prepare him for the game against Arsenal. It is an amazing recovery but I don’t want to say more.

“I spoke with the player and he agreed, and the medical staff agreed, to have a plan to put him on the pitch against Arsenal.”

But while the news on Gomes is positive, Ancelotti said fellow midfielder Jean-Philippe Gbamin could need further surgery as he continues his long comeback from the thigh injury which has kept him out since August.

It is a fresh setback for the the £25million summer signing from Mainz, who has made only two appearance for the Toffees and has been sidelined since August.

“Unfortunately he had a problem and he had a check with the doctor,” Ancelotti said.

“It may be in the next few days he needs a new surgery to recover him before the end of the season.

“We hope to see him before the end of the season.”

Gbamin is the only player missing from the Everton squad for Saturday’s trip to Watford, with Gylfi Sigurdsson and Alex Iwobi having returned to fitness since the 2-2 draw with Newcastle on January 20.

Ancelotti said he could consider the returning Gomes as a “new player” on a transfer deadline day where Everton are not planning any late moves – with 17-year-old defender Jarrad Branthwaite their only January signing so far.

“This is really good news, maybe we can consider him a new player in the transfer market,” Ancelotti said of Gomes. “We don’t need to buy others.

“We are not anxious to find new players because we have a big squad… If there was an opportunity we could consider it but I think the market didn’t show for us a really good opportunity.

“We have the things to do well this season and after that we are going to have a period where we can improve the squad.”

The window has seen a number of players leave on loan, although only Cenk Tosun was a first-team regular.

Rumours earlier this week linked Richarlison with a move to Barcelona, but Ancelotti said there was never a concrete offer on the table.

“I was surprised yesterday, he was here still here, he didn’t go to Barcelona,” Ancelotti said with a laugh.

“There was rumour but we didn’t receive an official offer. The player is happy here, he signed a new contract just one month ago.