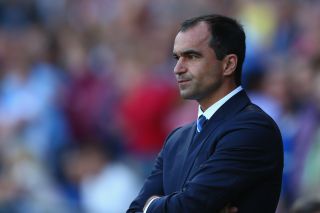 Referee Anthony Taylor waved away the visitors' appeals for a spot-kick after Leighton Baines had seemingly been felled in the box by Gary Medel late in the first half at Cardiff City Stadium.

And, though Martinez insisted that Everton should not have needed to rely on a penalty to win a game they largely controlled, he bemoaned the failure to award what he termed a "stonewall" spot-kick.

"I was probably at a perfect angle and when Baines gets into the box it looks clear that he gets impeded," he said.

"There is no need for him to go down because obviously he's in a great position. And those are the moments that in a performance like this you need to get the break to get the three points.

"In football you get those sort of decisions. I thought in the first half the crowd played a magnificent role and you have to give credit to the Cardiff crowd, I thought they were really influential and on top of the game.

"For me and the angle I was it looked a really clear stonewall penalty. But overall I don't think we should have relied on a penalty to win the game.

"Obviously we need to give credit to Cardiff, they worked extremely hard and they came in off the back of an impressive result against Manchester City.

"For us, I knew if we kept a clean sheet we had a great opportunity to win the football match and I felt that we dropped two points."

The Spaniard also expressed his belief that Everton deserved more than their third draw in as many Premier League outings in 2013-14.

"It was a tight affair," he added. "From our point of view we knew where we were coming and to keep a clean sheet is always a pleasing aspect.

"In the final third we couldn't find the right pass but I thought that we grew into the game. The second half we controlled it much better and it was just a matter of making good decisions in the opposing box to collect the three points.

"It's a little bit mixed feelings because I know how hard you have to work to keep a clean sheet against this Cardiff side, from the dead-ball situations to the counter-attack football, and I thought we handled their threat really, really well.

"Just in the other side I thought that because of the performance we should have found a way to score a goal that would give us the three points."