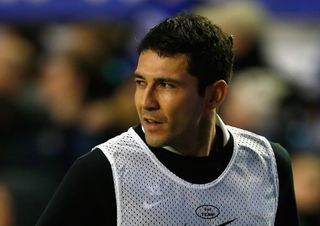 The Paraguayan has been plagued by injury since following Roberto Martinez from Wigan Athletic to Goodison Park in the summer, having undergone surgery on a persistent hernia problem sustained in pre-season.

Everton have been short of defensive options in recent weeks, with Phil Jagielka and Sylvain Distin both sustaining injuries, but it seems Alcaraz's short run in the first team has taken its toll and will now see him missing a further fortnight.

A statement on the club's website read: "Defender Antolin Alcaraz is suffering muscle fatigue and is expected to be out for a fortnight.

"The problem means Alcaraz will almost certainly miss the Blues' next fixture, a trip to West Bromwich Albion on Monday 20 January."

Alcaraz has made just three appearances since signing for Everton, playing the full 90 minutes in each, but missed Saturday's 2-0 win over Norwich City.