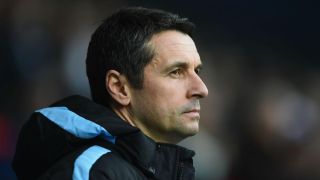 Villa remain at the foot of the Premier League table but had the better of the chances in the West Midlands derby, and Garde cited the improved spirit amongst his players as a factor in their upturn in form.

He said: “If you look at the way we played, I’m pleased with that in terms of collective spirit – it was much better than a few weeks ago. In terms of quality, the second half was very good.

“In terms of the result, I’m a little bit disappointed. In our current situation we need more than one point. An away point is always a good one but we needed more.

“When you don’t score a goal, you don’t deserve to win. We passed the ball very well but in the last third we had too many difficulties to score goals.”

Villa are six points behind 19th placed Sunderland, and nine points short of climbing out of the Premier League relegation zone, but Garde has not given up hope of staying up in his first season in charge.

He said: “I just regret that we have started the season very late and now it’s more difficult.

“I told my players that if we keep playing with this spirit until the end of the season, everything is still possible.”

“When you arrive in a football club it takes a while to know people and assess their quality, as football players and as human beings.

“I know that I can rely on these players."