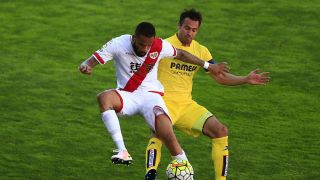 Former Manchester United flop Bebe has sealed a return to Rayo Vallecano on loan from Eibar.

The Portuguese forward, a famously eyebrow-raising recruit towards the end of Alex Ferguson's reign at Old Trafford, spent the 2015-16 season at Rayo while on the books at Benfica.

His form there persuaded Eibar to take a punt on the 27-year-old and he scored five times in 26 appearances last season.

Bebe has been more of a bit-part player for Jose Luis Mendilibar's men this time around and he will now join Rayo's promotion push as they aim to end a two-season absence from LaLiga.