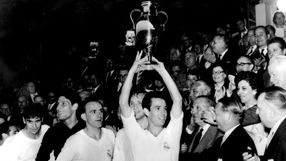 The midfielder helped Real win five successive European Cups during his 13 seasons at the club before leaving in 1962 having scored 96 goals in 306 appearances.

Alongside the likes of Alfredo Di Stefano and Paco Gento, Zarraga led the Madrid team to European glory from 1956-60 and also won six league championships.

He played for Spain eight times.

Real will hold a minute's silence and the team will wear black armbands as a mark of respect in Wednesday's Champions League quarter-final second leg against APOEL Nicosia at the Bernabeu.