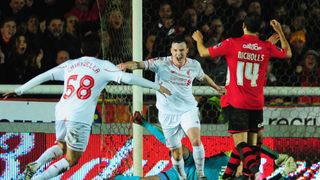 Jurgen Klopp's injury-ravaged Liverpool fought back twice to salvage a 2-2 draw and earn a replay against League Two side Exeter City in the third round of the FA Cup on Friday.

And the Liverpool boss in his first game in the competition saw his side briefly fall behind at St James Park when Tom Nichols' ninth-minute opener was cancelled out by Jerome Sinclair's first goal for the visitors three minutes later.

Klopp's young side acquitted themselves well after levelling, but trailed 2-1 at the break when second-choice goalkeeper Adam Bogdan made a mess of Lee Holmes' corner - the winger's delivery sailing directly into the far corner.

Experienced midfielders Adam Lallana and Lucas Leiva remained on the bench and Klopp's faith in his inexperienced line-up paid off when substitute Sheyi Ojo helped set up Brad Smith's equaliser 17 minutes from time.

Having twice let their Premier League opponents off the hook, Exeter will get another chance to spring a shock at Anfield, when Klopp will hope Liverpool's injury crisis eases in time for the replay.

Exeter were the victims of a giantkilling last season as they were dumped out by non-League Warrington Town, but Nichols had the home crowd on their feet when he opened the scoring with the first attempt of the game following strong work down the right from Jamie Reid.

The winger exploited space behind Jose Enrique and crossed for Nichols, who prodded the ball past Bogdan, although the visitors responded impressively.

Liverpool edged the remainder of the opening half hour, but struggled to create further chances with David Noble almost restoring Exeter's lead when he shot over the crossbar from inside the area.

And after Christian Ribeiro evaded his marker only to head wide of Bogdan's right-hand post, Liverpool fell behind again as the goalkeeper's weaknesses at set-pieces were exposed on the stroke of half-time.

Holmes whipped a corner in from the left and, under pressure on the line from Nichols, Bogdan flapped at the delivery - reminiscent of his error that led to Watford's opener in his side's defeat at Vicarage Road last month.

The hosts began the second half brightly and saw penalty appeals turned down when Ribeiro went down under the challenge of Kevin Stewart before Bobby Olejnik denied Benteke a headed equaliser from inside the six-yard box.

Ribeiro glanced another header wide as the game opened up prior to the hour, but another sloppy piece of defending allowed Liverpool to level once more as Jordan Moore-Taylor cleared Ojo's cross directly to Smith, who reacted quickly to divert the ball back into the net.

Both sides survived scares late on and will be separated in a replay on Merseyside following a result that largely suits both parties - given Liverpool's injury woes and Exeter's lowly position in the Football League pyramid.